I recently attended a public meeting that was to showcase the proposed changes by the New Mexico Department of Game and Fish in the rules that regulate the manner and methods by which we are allowed to take game and fish in the State of New Mexico . 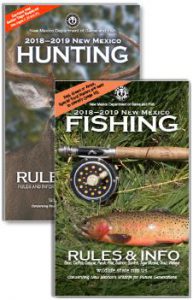 This includes things like legal weapons/ammunition, hunting from the road, and types baits you can use when fishing. In short, all the little minutia that we as hunters and anglers fret over to make sure we are in compliance with the laws! Department personnel travelled all the way to Raton from Santa Fe, a three hour trip one way, to present these proposed changes. To say that the turnout was lackluster would be an understatement. Not one member of the hunting public attended the meeting! I was surprised by this, as often on social media, and in person I have had occasion to read/hear a fellow hunter’s rant about the “idiotic” laws passed by the Department that don’t make sense. I wondered what the lack of participation might be attributed to. Was it due to the location? The meeting was held at the New Mexico Department of Game and Fish Northeast area office in Raton, which easy to locate and is well known throughout the area. The meeting was to start at 6:00 pm which would afford most working people the opportunity to attend.  In conversation with the presenters, who held three previous public meetings in other parts of the state on the same topic, I learned that none of the meetings were well attended. The meeting held in Albuquerque had the highest attendance and the majority of attendees were pilots. Most of the meetings had 5-10 people in attendance.

Contrast this with the public meetings held that outlined the changes to the Elk Private Land Use (EPLUS) and the Antelope Private Land Use (APLUS) systems. The meeting rooms were packed to overflowing leaving standing room only and most of those in attendance were landowners. I find it shameful that the contrast is so stark! Especially since there always seems to be an outcry from public hunters about how much special treatment is afforded private landowners by the Department. These meetings were a chance for the hunting public to let their voices be heard on a wide variety of topics that affect how we hunt each year. These regulations should reflect a common sense approach to hunting and fishing, however often the unwitting public find themselves in violation of these regulations due to misinformation or ignorance. Thus my confusion regarding why, when we as hunters have a real opportunity to affect change and let our voice be heard, such a dismal number of people attended these meetings.

The suggested changes span a wide variety of issues including an attempt by the Department to simplify some regulations and decriminalize otherwise benign acts that are only targeted when associated with hunting or fishing. For example:

These changes are an obvious attempt to simplify how we hunt and fish with the goal of eliminating the possibility of the general public violating a poorly written law. On the other end of the spectrum, there are proposed rules covering loop holes in the law that are in dire need of addressing:

While most of the time, I am resistant to the addition of new laws to the books, rules such as these address major loopholes within law that if exploited could prove detrimental to the resource in addition to robbing the law abiding hunters, anglers and the people of New Mexico of their rightful wild game resources. Also within the proposed rule changes are found suggestions regarding debatable practices or designed to address issues brought about by advances in technology:

These and other rule changes may be hotly disputed in the years to come and time will only tell if the suggested changes will enhance or retract from the hunting experience. Hard-core fly fishermen/women may be staunchly opposed to the allowance of soft plastics in special trout waters, however on the enforcement side of the coin, this change simplifies an already complicated rule book. The march of technological progress cannot be stopped, however the debate rages as to the increased use of technology in hunting. Josh Kirchner, of goHUNT.com, summarizes the pros and cons of technology in hunting pretty well and while the role technology plays in the future of hunting, trapping and fishing may be unclear, there is one thing that is clear; If we public hunters/public landowners do not start getting involved, our voice will not be heard.

Skin in the Game

Private landowners have an extremely strong voice within the political and socio-economic battles that are being waged every year. They have effectively learned and employed the principle of strength in numbers. They put aside differences and band together to fight issues that threaten their livelihood and rights. They are extremely diligent about voicing their opinions and as demonstrated by the public meetings held about EPLUS and APLUS, while they may not always agree on the path forward, they SHOW UP and contribute to the conversation. I believe that we as public hunters should learn from this. If we do not start showing upand joining the conversation, we have no moral ground to stand on. Your “rant” on social media does nothing except to make you feel like your opinion matters. The fact is your opinion only matters if you are voicing it through the appropriate channels. If we are to change bad laws and prevent the further loss of rights, we have to get involved in our legislatures. When it comes to Departmental rule changes attending public meetings, adding constructive comments via the Department’s email and writing the Game Commissioners is the process by which we can have our voices heard. If you missed the meetings (which I’m guessing you did!) its not too late. Visit the Department’s website (click here to view the proposed changes and leave a constructive comment )!

I want to clarify that my intent is not to be divisive nor to add to the chasm between public hunters and private landowners. In fact, I hope that my words will help to bridge that gap. I believe that the two groups more often than not have similar intents and desires regarding our rights, lands, water and wild resources. We have got to start working together and getting involved to help fight the good fight to preserve our rights and heritage, in addition to conserving our natural resources for future generations. Unit next time…Adios.

A Change of Perspective is Overdue