As trapping has been in the forefront quite a bit lately what with the anti-trapping bill in the legislature and our recent podcast on the trap line with Ty Jackson, I thought this story fit the bill (pun intended)! Original article written by C. B. Berghofer, Beaver Control Manager.

From page four: The Lamentations of a Trapper – Our 1956 trapping season is now under way, and already the trappers are being plagued with the same old trouble-trap thieves. Why is it that people who wouldn’t think of stealing any other type of personal property will steal traps which in many cases they have no intention of using?

People generally believe that such thefts and acts of vandalism are committed by kids. In my 15-year experience with trapping and working with fur trappers, this is not so. In most cases footprints and other evidence found near molested trap sets are those of grown men. This is so,  even in cases where traps are not stolen but are found taken up, sprung, and thrown into deep water or a patch of brush, for no apparent reason.

Put yourself in the place of a lawful trapper who has purchased a license, and traps valued at several dollars each, and boots, stretchers and other equipment. He works hard, walking up and down brushy stream banks and rocky canyons in search of locations where fur bearers or predators may be taken and where there is the least probability of catching livestock, waterfowl or other non-furbearers. This man in most cases works for a living at something besides trapping, and he must get up before daylight in order to run his trap line and be at work by eigh 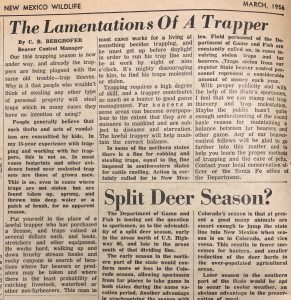 t or nine o’clock. It’s mighty discouraging to him, to find his traps molested or stolen.

Trapping requires a high degree of skill, and a trapper contributes as much as a hunter to good game management. Fur bearers in some areas can become overpopulous to the extent that they are a nuisance to mankind and are subject to diseases and starvation. The lawful trapper will help maintain the correct balance.

In some of the northern states there is a fine for robbing and stealing traps, equal to the fine imposed in southwestern states for cattle rustling. Action is certainly called for in New Mexico. Field personnel of the Department of Game and Fish are constantly called on, in cases involving stolen traps and fur bearers. Traps stolen from our regular State beaver control personnel represent a considerable amount of money each year.

With proper publicity and with the help of the State’s sportsmen, I feel that we can stamp out trap thievery and trap molestation. Maybe the public hasn’t quite enough understanding of the sound basic reason for maintaining a balance between fur bearers and other game. Any of our beaver-control fellows will be glad to go further into this matter and to help you learn the proper methods of trapping and the care of pelts. Contact your local conservation officer or the Santa Fe office of the Department.

It’s amazing how some issues persist no matter what you do. Even more so today, I believe the general public have a poor grasp on how wildlife management works and just how inter-connected everything really is. As stated so succinctly by Mr. Berghofer, there is sound, basic reason on top of scientific data to support furbearer management through well regulated, lawful trappers. Educate yourself and the facts will bear the truth. Trapping is highly regulated in NM and is strongly supported by wildlife biologists across the nation as a safe, effective and humane method of harvesting furbearers.  Here are some sources to help understand the key role of trapping in furbearer and ultimately wildlife management:

The Wildlife Societies (TWS) position statement on regulated trapping:
http://wildlife.org/wp-content/uploads/2016/04/SP_TrapsTrappingandFurbearerManagement.pdf
and related documents here:
Position Statements & Other Policy Engagement Documents | THE WILDLIFE SOCIETY
The American Association of Wildlife Veterinarians:
https://aawv.net/wp-content/uploads/2017/05/AAWV_PS_FootHoldTraps.pdf
The Association of Fish and Wildlife Agencies (AFWA) brochure on trapping:
https://www.fishwildlife.org/application/files/3515/2935/7737/Trapping_in_21st_Century_Brochure_2018.pdf
These organizations are made up of professional wildlife biologists and are the most respected associations in the field of wildlife management in North America.  Finally, trapping and the harvest of fur-bearing animals fits within the North American Model of Wildlife Conservation.  This model was first articulated in 2001 and specifically addresses harvesting furbearers and the use and/or sale of fur.  Don’t take my word for it, read the original paper here:
http://conservationvisions.com/sites/default/files/why_hunting_has_defined_the_north_american_model_of_wildlife_conservation.pdf
This topic elicits strong emotions, however, the facts support keeping regulated trapping as a legitimate, safe, humane and effective wildlife management tool.  Please keep wildlife management in the hands of wildlife professionals and not ruled by emotion or propaganda. History lesson over……carry on! Until next time – Adios!
Please follow and like us:

A Change of Perspective is Overdue

From History: Other States Keeping Watch on Sheep Hunt