One of the reasons I find the collection of New Mexico Wildlife Magazines I have so interesting stems from the fact that I have relations that are featured within it’s pages! I vaguely remember my “uncle” A.J. Garner and his kind and loving wife Agnes from my early childhood. A.J. was actually my Dad’s uncle. I knew Uncle A.J. as a retiree from the Forest Service, but remember being told about his time with the New Mexico Department of Game and Fish as well. This is a great little article that fairly succinctly summarizes his impressive career with the NMDGF. Enjoy!!

From page two: Garner Appointed – A. J. Garner has been appointed acting assistant director of the Department of Game and Fish. A biologist who majored in animal husbandry, Garner has been with the Department intermittently since 1940. he has served as patrolman, antelope trapper, district game warden, chief of information and education, and project leader of the big-game  water-development program. 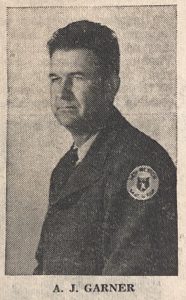 Between his stints with the Department, he had four years in the Army Air Corps. On the basis of his background, he won a place in the GI homestead irrigation project that received national prominence. In Riverton, Wyoming, he operated his 160 acres of irrigated land and some 400 acres in permanent pasture for cattle and sheep. During this time he was GI instructor for agricultural trainees. He remained with this project for six years until his return to the Department in 1954.

Garner was born in Brownfield Texas, but came to New Mexico at the age of three weeks. Except for the Wyoming period, he has been a resident here since that time. He lived on livestock ranches all his early years. He now lives at 7 Pueblo Drive, Santa Fe. His wife, Agnes, was born and raised at Cimarron; like A. J., she is a graduate of New Mexico A & M (New Mexico State University). They have two children, Betty Ann, age nine, and Jack, six years old.

I think it is a pretty cool connection to history when a family member that you personally knew can be remembered in such a way. I am appreciative to A.J., and all of the others who have come before us that had the fore thought and passion to conserve this state’s wildlife. I am also grateful to all those now continuing that mission thus giving me and everyone else the opportunity to enjoy New Mexico’s wildlife now and for future generations! Thank you. Adios.

From History: The Lamentations of a Trapper